1. Vision and myelination defects due to loss of Vps11 function in a zebrafish model of genetic leukoencephalopathy

Leukodystrophies (LD) and genetic Leukoencephalopathies (gLE) are genetic disorders affecting the white matter (myelin) in the central nervous system. LDs and gLEs progressively affect the motor and sensory systems, including the visual systems. Parents of affected children first note visual problems as a gradual loss in the ability of their child/children to track visual cues. Vision slowly worsens over subsequent years, likely due to the loss of myelin in the optic nerve and brain, termed cortical blindness. An MRI is typically diagnostic for myelination defects, but a clear diagnosis of disease-specific LDs and gLEs remains a challenge, and the majority of LDs and gLEs have an unknown genetic origin. Our collaborators recently identified a mutation in VPS11 as a causative allele in the gLE phenotypes observed in five individuals from three unrelated Ashkenazi Jewish (AJ) families. Our analysis indicates a carrier rate of 1:250 AJ individuals. VPS11 functions in a complex of four C-VPS proteins, which are conserved from yeast to humans, and control critical cellular processes in the endolysosomal and autophagy pathways. These processes are only beginning to be investigated at the molecular level, mainly in yeast. Indeed, prior to our recent report, there were no known human mutations of any of the C-VPS proteins. However, we previously characterized a zebrafish vps11 mutant and have recently discovered that it shares many of the phenotypes of the human mutant, including defects in endolysosomal and autophagy pathways, myelination defects in the CNS, loss of retinal and CNS neurons, and motor defects. This project aims to take advantage of the zebrafish model to characterize the pathology underlying the vision loss associated with loss of C-Vps function 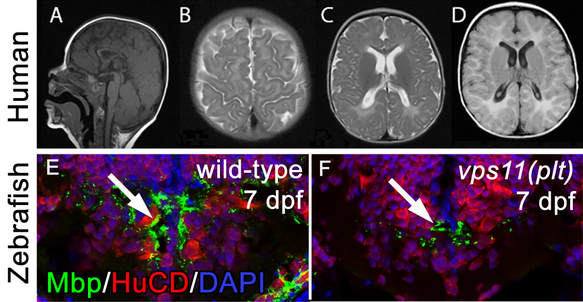 Loss of human and fish VPS11 function results in hypomyelination​. In patient B at nine months of age, thin corpus callosum (A), T2 diffuse hyperintensity in the peri-Rolandic white matter (B) and posterior occipital white matter region (C) were seen; FLAIR diffuse hyperintensity in the white matter region was also seen (D). Hindbrain immunolocalization of MBP (myelin; green) and HuCD (neurons; red) in wild-type (E) and vps11(plt) mutants (F) at 7 dpf. A significant reduction in MBP staining is observed in mutant animals.